I really like the work of this year’s Turner Prize winner, Helen Marten (1985), and I think I know exactly why. None of the fangled explanations of her process that I have read so far actually reveal anything about the work itself; but her installations revel in a familiar mild glow of pale hues, tactile small treasures and slim verticals of Finnish interior design. It is perhaps not her intent, but the way that Marten’s objects spread across the open gallery spaces like gentle spatial drawings owe, to my mind, a lot to flatlay styling so often found on Pinterest or Instagram boards of followers of the calmly serene Scandinavian stylists Susanna Vento or Anna Pirkola. Even the artist herself, dressed in pale top and slacks at the Hepworth sculpture award photograph, looks like one of the midcentury modern Scandi models wearing a Vento coat. I can’t help but think that the seductive balance and harmony of her assembled materials and textures, the materiality, scale and tactility of her elegant and quirky shapes, as well as the hand-crafted dimension of her work, owe something to the slick photo styling, and even the colours, of the über-minimalist Scandinavians.

Perhaps not. Perhaps this is just a visual snapshot that has been lingering on my mind and somehow carried itself over when I looked at the press material of Marten’s work from the Hepworth sculpture award and the Turner prize. Perhaps I’ve spent too much time looking at the cute blush, copper and dove grey hued images or the the lovely oiled Danish teak on Etsy, so my inner redemption of Marten’s Part offering (new and amazingly sexual daughters), 2014, looks seductively like it may belong to the same palette family. Or perhaps the artist herself has been checking out the same spaces, retaining a similar snapshot in her mind. Her spoons, threads, tiny non-vessels, imaginary modulars seem to suggest so. 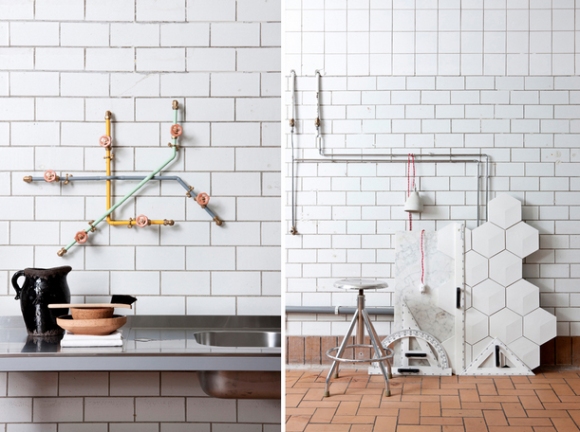 Flatlay styling – the method used to showcase a set of small, tactile, covetable objects in close proximity, with plenty of free space, usually against a pale background, photographed from above – has been made popular by the professionals stylists like Vento, but has been taken over by the army of crafters and makers on sites like Etsy, who were looking for a way to display their objects in a way that gave them the advantage of both clarity and curiosity. This is why there often is a pair of copper scissors, a tiny ball of softly coloured wool, a thin calligraphic sprig, a textured ceramic surface, or cleanliness of a gridded notebook page. These small objects create balance and richness on a photograph, harmonising in pale yet fresh unison, creating new and interesting drifts of gaze across the canvas.

I find similar quality in Marten’s work. I appreciate, warmly and wholeheartedly, the beautiful multidimensional universe of gently yet thoughtfully, precisely yet wistfully arranged objects. I prefer them for being dreamscapes and not useful designer things. Every pale ochre, darkest shadow-on-snow white, every oyster hue edged with gunpowder, pale powdery blue obscuring the rim of faintest petal; every charcoal line drawn across space followed by its shadow; every curl and curve breaking and denying the melancholy weight of midcentury horizontals, they please me. They fill me with a very non-consumerist joy, a playful joy of inner song which needs no politics, no art historicism, nothing to buy, no-one to meet, nothing to read up, catch up with, reflect upon, other than its own inner dance, which is precise, light, and frail like a phrase on the tip of the tongue that has not been found yet.

This, critics say, is the “characteristic of the times we live in”. Endless window gazing, tactile pleasures of good crafting, marginal paraphrases of the minor universes that preoccupy us – an escape into dainty, sweet spaces of (an)esthetised, eternal polar lights. Hepworth would raise an eyebrow.

The review on Supervizuelna appears here.